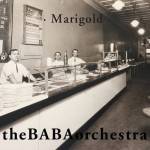 Lauren Elizabeth Baba is a composer and conductor of theBABAorchestra, a 17-piece big band that compellingly blends together jazz, rock, and avant-garde with an experimental flair. Not unlike several other creative music big bands of the last decade (the Eco-Music Big Band, Darcy James Argue’s Secret Society, Brooklyn Raga Massive, Brian Krock’s Big Heart Machine, John Korsrud’s Hard Rubber Orchestra, and those of Nathan Hubbard, Dan Weiss, Ben Stapp, and others) Baba and company nail it.

With five saxophonists (most doubling on flute), four trumpeters, four trombonists, guitar, bass, piano, and drums, theBABAorchestra generates a thick, dense, multi-directional sound of remarkable depth and complexity. All members stay busy, each playing for most of the album. Consisting of a single 41-minute piece roughly organized into four movements, Marigold offers a non-stop, information-rich exploration of textures and overlapping melodies.

The first eight minutes serve as an intro of quiet and loosely improvised piano, flute, bass, guitar, and drum explorations with occasional themes contributed by a subset of the horns. This evolves into droning walls of horns supporting sax soloing. A few minutes later is a free improv blowout grounded by series of chord pairs navigated by the horns. After this point, the horns break up into subgroups and set forth arrays of layered melodies and staccato blasts interspersed with angular guitar, blistering sax solos, and aggressive bass and drumming.

Around the 26-minute mark, however, is where Marigold begins to take off. Piano and horn chording slowly builds in volume, density, and tension. Toward the climactic crescendo, the horns take on rapid-fire Middle-Eastern themes supported by wild drumming and simultaneous soloing. The result is nothing short of breathless.

Plenty of credit goes to Baba and friends for producing an offering of unusual intensity and style. If there is any justice in the world, Marigold will show up on many best-of-year lists. Bravo.