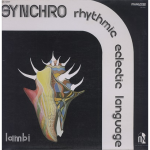 I’ve always found an affinity between the afrobeat grooves of Fela Kuti and the pounding Zeuhl rhythms of Christian Vander’s Magma. Not so much that one influenced the other, but that they had a common influence. This re-release of Lambi, a 1976 recording by Synchro Rhythmic Eclectic Language, ties together these two camps with afro-Carribean and funk stylings tossed in. A double LP, the album contains bonus tracks not on the original release (it is not clear whether the bonus tracks have been previously released officially ).

The lineup is stellar, with AACM co-founder Steve McCall on drums, Jo Maka on sax, Jean-Yves Rigaud on violin, Gerard Curbillon on electric guitar, Georges-Edouard Nouel on electric piano, and Louis Xavier on bass. Rigaud was a member of Magma-offshoot Zao. The opening effort, Rigibo, features a Fela-like sax theme over a repetitive rhythm and chanted vocals. Following that, the 14-minute title track includes late-night blues, African percussion, prog-rock inflected rhythms and a taste of jazz both inside and free.  The remaining pieces offer similar genre-bending with long solos and infectious jams.

As a result, Lambi is a rather unique and unusual statement, especially given the time frame of its release. A welcome reissue.