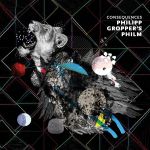 If I am counting correctly, this is the fifth release of Philm, the quartet led by Berlin-based saxophonist Philipp Gropper. Last year’s Live at Bimhaus was an AMN Album of the Year, so expectations were high. And Consequences, a studio effort, does not disappoint.

The group maintains the same lineup: Philipp Gropper on sax, Elias Stemeseder on piano and synth, Robert Landfermann on bass, and Oliver Steidle on drums. While Gropper as group namesake contributes his share and then some, this is a truly collective effort. In particular, Stemeseder, Landfermann, and Steidle play Gropper’s labyrinthine compositions with gusto and an eye for detail.

Gropper’s charts exhibit complex patterns with multiple disjoint rhythms and themes often being produced simultaneously. His writing has a number of characteristic qualities, including a strong sense of unpredictability, and varied influences. Clearly, Gropper is well-versed in jazz, free improv, classical, and non-Western genres. The unsung hero of Consequences, however, is Steidle, who provides non-stop, driving explorations that often juxtapose stylistically with what his bandmates are outputting. Stemeseder also stands out with his percussive chording. Landfermann, a bit lower in the mix, nonetheless is remarkably active, adding flourishes and runs where others might stick to repetition.

As just one example, Consequences Part 2 features Gropper running through staccato lines and pulses over a three-part rhythm that never quite syncs. From there, Gropper explores a set of themes and variations while Steidle stays effortlessly busy. In and between all of this, Stemeseder and Landfermann explore a set of shifting patterns. Thinking From The Future (Are You Privileged?) explores another aspect of their capabilities with an introduction that is reminiscent of 20th-century chamber music. This morphs into complex modern jazz with runs from Stemeseder and a staggered start / stop set of rhythms. Stemeseder switches to synths and Gropper shimmers through a series of angular leads to close the piece.

Consequences is a primal exercise in barely-contained tension. Gropper and company could easily explode and blow their way through the 50-some-odd minutes of the album. But this is not a group that is explicitly outside. Unconventional and creative, yes, but on their own terms.