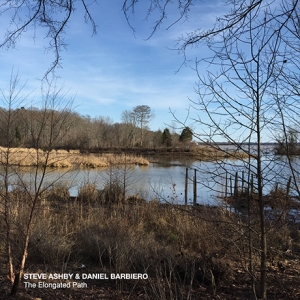 Steve Ashby and Dan Barbiero* provide a multilayered ambient excursion in this concise release. Consisting of five tracks totaling 36 minutes, the duo explores outdoor soundscapes and atmospheres. Barbiero contributes bowed melodies and drones on his double bass. Never in a hurry to get anywhere, he makes use of space as a complementary force in his playing. Ashby focuses on providing field recordings, some more processed than others, and a small amount of guitar-work.

The album has a distinctive lo-fi feel that can be attributed to background noise or some degree of tape hiss. While most tracks feature Barbiero’s deliberately-paced melodies, others are closer to pure soundscapes with the bass just another source of abstract impressionism. Ashby makes heavy use of recordings of birdsong, and artfully interleaves them with percussive elements. These latter effects lead to the most compelling aspect of the album – a melancholic, but non-threatening, pastoralism that is both detail-oriented and non-intrusive.