LISBON – The thermometer passed the 110-Fahrenheit mark in the last two days, but the heat only seemed to energize the musicians who tackled John Zorn’s compositions with energy and artistry in this Special Edition of the Jazz em Agusto festival, dedicated to the maestro.

The early concert Thursday featured the electric guitar quartet, Dither, the New York based ensemble who played some of Zorn’s improvisational game pieces, in which members signal changes in tone, tempo, or attack with hand motions. The group has been together for 11 years and these pieces are featured in their 2015 CD Dither plays Zorn, on his Tzadik label.

James Moore, Josh Lopes, and Gyan Riley alternated while Taylor Levine, who also uses effects pedal, remained on stage in groups of three as they played pieces inspired by the cut and thrust of hockey. They played an impressionistic “dry” version, and a grittier and more explosive “wet” version. The latter had a distinct cinematic quality, a loud soundscape that mimicked sirens drilling, and thunder, ending in a fadeout. The piece called Fencing opened cacophonic, devolved into silence, then picked up with snippets of sound, scratching, fragments and clusters, riffs and chords – a construct inspired by the cut and thrust of a fencing joust. The quartet played a piece Zorn calls Curling – “everyone’s favorite Olympic sport,” Moore joked – which began with moody long tones that established a spacey, otherworldly mood.

Insurrection, a new Zorn-inspired project, featured the electric-guitar explorations of Julian Lage and Matt Hollenberg, with the versatile Trevor Dunn on electric bass and power drumming of Kenny Grohowski. They came out in full throttle, highlighted by the guitarists trading phrases, before shifting into ballad mode with Lage’s artful development. The band then moved into funky mode. Lage was the dominant figure with his shifting textures and melodic invention. At one point bassist Dunn had to carry the band because Hollenberg broke a string and Lage helped him replace it while Grohowski dropped a stick and carried on with only one. The concert continued with alternating ballads and avant rock-oriented pieces – a varied and energized 65-minute show where art and power happily co-exist.

Trigger, the early show Saturday, featured Will Greene (electric guitar), Simon Hanes (electric bass), and drummer Aaron Edgcomb. The group has been playing music from Zorn’s Bagatelles and Apparitions series for the past four years. They came on strong and powerful with a hard- rock edginess, playing ten Zorn melodies. The group is a sign that Zorn’s charts appeal to younger players and fans from the rock side of life, even as some in the audience walked out. These early concerts cost 5 euro and are designed to appeal to the broad public, some of whom walk out early perhaps expecting an easier ride. 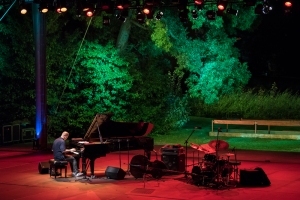 The most enriching and rewarding experience for this reviewer came late Saturday in the double bill featuring pianist Craig Taborn solo, followed by pianist Brian Marsella, with upright bassist Trevor Dunn and drummer extraordinaire Kenny Wollesen. Taborn, 48, paid tribute to Zorn as “a hero of mine since I was 13 when I first heard his music” and proceeded to play five pieces in which you could hear his joy and revel in his artistry as he extended the themes like a skillful sculptor carves a shape out of stone. With a variety of techniques, including rapid keyboard runs, and a remarkable ability to plays chords and extended melody with either hand, or both simultaneously, Taborn’s artistry and warmth are a winning combination.

Marsella played his set from the Bagatelles songbook, up-tempo and beautifully sustained by the tuned in and turned on rhythm section. Dunn and Wollesen had some nice solos, but Marsalla’s engaged and inspired pianism was the outstanding element in the gig, his lyricism and ferocious action on the keyboard a thrill to behold.

The last two concerts will be reviewed early next week.