LISBON – The second half of this festival, a John Zorn Special Edition, began Wednesday with an incandescent performance by American Robert Dick, improvising with the contrabass flute, an instrument rarely heard in a solo format. The flute is equipped with what Dick calls the glissando headjoint, which he invented. It enables him to create what resembles oscillating sound waves, double tracking with the notes he taps out on the keys, injecting a simultaneous percussive effect.

It was a fascinating and engaging exploration for player and listener alike, a kinetic and all acoustic soundscape that reflects the spirit of the creative adventure at the heart of John Zorn’s work as a musician, composer, leader, and cultural entrepreneur. He is being celebrated at the 18 concerts of the annual Jazz em Agusto Festival here, sponsored by the Gulbenkian Foundation. Displaying his quirky humor, Dick remarked, “You never feel alone on stage with a contrabass flute,” his right arm wrapped around the instrument. It stands upright and towers about his head. He compared his improvisations to “a diary of the id and the unconscious.” The most minute sounds are picked up with six mikes extending top to bottom in front of his flute. The indoor hall was packed, part of the popular early evening series that attracts big crowds. Tickets are only five Euro.

The 18 concerts are dedicated to Zorn and he performed in three of them when the festival opened last weekend. Compositions from Zorn’s 300 Bagatelles were on the menu for Wednesday evening’s double bill, performed in the 950-seat amphitheater where the musicians emerge from an underground green room, with trees and shrubs a backdrop.

Next, John Medeski’s organ trio sounded almost apocalyptic with an immediate and furious attack as they interpreted and developed Zorn’s Bagatelle compositions in an avant rock format. The music was propelled with high-energy by the propulsive and hard-hitting drumming of Calvin Weston and the fluid and inventive electric guitar of Dave Fiuczynski. As he extends the melody and adds depth and contours to it, Fiuczynski is so agile and fluid, the music seems to emerge from his body. Sizzling!

Slow is Possible is the evocative title of the Portuguese sextet featured in the early set Thursday. Influenced by Zorn’s 1990 Naked City album, they began with long tones and minor chords. It was a foretaste of the hour-long hybrid of melodic and atonal pieces, with lovely folk-sounding tunes, blues, lots of pauses, a sludge rock and noise segment, then a slower pace, and the sounds of silences slowing it down. 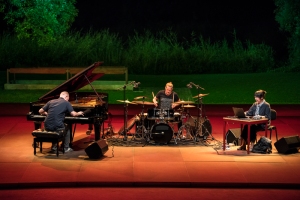 Introducing the late-night show, Highsmith Trio drummer Jim Black said he, pianist Craig Taborn and laptop innovator Ikue Mori would spontaneously improvise an hour of music in the John Zorn tradition: “He’s all about intimacy and immediacy.” The set began light and airy as the musicians developed ideas and either enhanced what a colleague played or moved in a new direction. Taborn provided much of the color with his roaming keyboard, sometimes plucking the strings inside the piano. His playing was both inventive and enchanting. Mori enhanced with tone and texture and added percussive elements and bird-like chipping from her laptop, while Black made every effort to invent — rubbing the cymbals, using his hands rather than sticks, hitting drums with rags, and power drumming only rarely. It was a genuine collaboration and a unique listening experience.

Six remaining concerts will be reviewed next week.