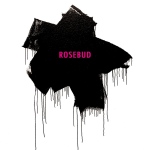 Consider this album one that slipped through the cracks. Released more than two months ago, it would have rightfully had a place on our Best of 2017 list. So, as the cliché goes, better late than never. Or, more accurately, it was worth the wait.

Bernocchi is the co-founder of the RareNoise label, a genre-making thought leader in unconventional and creative music for the last decade. Here, he provides guitar atmospherics in the form of long-held power chords, harmonics, feedback, and drones, any of which may be subject to electronic processing. Quail is a classically-trained cellist who experiments with distortion and effects. Einheit, of course, was a principal member of German industrial group Einstürzende Neubauten, and contributes found-object percussion and machine rhythms. On Rosebud, this unusual trio combines gritty ambiance with restrained aggression that results in six pieces that contain a surprising amount of subtle beauty.

As an example track, Xanadu begins with an ominous, horror-movie riff from Quail. Einheit and Bernocchi join in with rattling percussion and distorted chording, respectively. Bernocchi double tracks his guitar lines, trading off low-end duties with Quail, while also providing sustained, bent wails. Einheit’s efforts are structured and rhythmic, yet the eschewing of a traditional drum kit makes his input appear to be both more mechanical and less constrained.

Rosebud is a study in contrasts: composition and improvisation, familiar and strange, catchy and harsh, dense and singular. Each of these qualities can be found throughout, often juxtaposed with one another. While a studio construct, the one cannot help but think that the music herein would be nothing less than spectacular if performed live.

My Tweets
Join 6,325 other followers