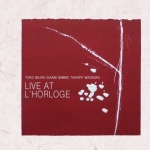 Live at L’Horologe, a set of music by the trio of pianist Yoko Miura, soprano saxophonist Gianni Mimmo and percussionist Thierry Waziniak, represents a further installment in the creative work that Miura and Mimmo have done together. The rapport that was apparent between them in their duo album, 2017’s Departure, is abundantly on display in this new release.

The music on Live at L’Horologe was recorded in concert in Tracy le Mont, France, in November 2018. Composition on all nine pieces is credited to Miura, but the excitement and finesse of the music is the product of exemplary playing by all three. Although it isn’t clear how much is written and how much is improvised—an indication in its own right that the set is a success—the music is structurally sound, whether or not these structures are premeditated or spontaneous. The improvisations are built around economical motifs—a handful of notes, a slow trill, a cascading figure—that are developed through variations, transformations, deviations, repetitions, and extensions. Miura’s playing cuts right to the essence of the music and is characterized by a generous sense of space, while Mimmo’s exquisite tone and lyrical sensibility are, as always, a pleasure to listen to. Waziniak’s drumming adds a particularly bracing sense of urgency and intensity.