Two albums by guitarists Santi Costanzo and Alan Courtis show some of the many facets of sound obtainable from this versatile instrument, either alone or augmented by objects and/or electronics.

Autocracy of Deception Vol. 1 is the first solo release from Santi Costanzo, a guitarist from Catania, Sicily. In group environments as well as solo settings, Costanzo has pursued a personal path of experimentation that has encompassed the heterogeneous musical languages of jazz, rock, free improvisation, and even serial composition. He’s been able to assimilate and transfigure these influences by projecting his own musical ideas forward, all the while maintaining an understanding and appreciation of these different forms of music, but without having any of them unduly limit his own field of possibilities. This sense of independence within assimilation comes out over the course of his album, which shows a fluency in tonal and atonal music within a fundamental, improvisational openness to following a line wherever it leads, as well as a broad-based technical mastery. The recording’s collection of four improvisation and seven “abstractions” find him pivoting between clearly articulated, complex chords in a classical fingerpicking style; heavily distorted rock freakouts; and looped, reversed, and other processed sounds. On some pieces, Costanzo further extends the guitar’s range of timbres by preparing it with foreign objects. But once all these modifications and transformations are stripped away, Costanzo’s default sound reveals itself to be an especially rich, crystalline, reverb-inflected tone. 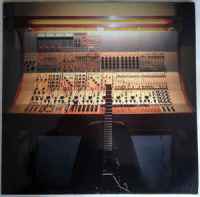 In contrast to the natural guitar sounds that undergird Autocracy of Deception, Buchla Gtr by the prolific Buenos Aires guitarist Alan Courtis takes the guitar’s native voice and transposes it almost entirely into the electronic dialects of the Buchla 200 synthesizer. For these recordings, which were made on the Buchla in EMS Stockholm’s studio, Courtis ran the guitar directly through the synthesizer and supplemented it with some pedals. The result is a double LP each side of which contains one long, sonically-textured piece. The guitar is for the most part unrecognizable as a guitar; rather, it serves as the engine driving an evolution of sounds that take on the guises of a shortwave radio tuned in between stations; a power drill emitting a high-frequency whine; a reverb unit being bumped and jostled; and intermittent drones of various timbres.