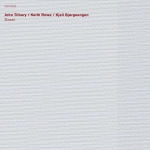 The fundamental and inescapable fact of our existence is that we are finite beings conscious of our finitude, and no more so than when someone near to us dies. This is the background to Sissel, a quietly moving performance by pianist John Tilbury, electric guitarist/electronics artist Keith Rowe, and Norwegian video artist Kjell Bjørgeengen, who collaborated with Tilbury and Rowe in the capacity of producer. The single piece that makes up the album was recorded as part of the Moving Sound concert series in Stavanger, Norway, in 2016, shortly after the death of Bjørgeengen’s wife Sissel, to whom the album is dedicated.

Taking as their inspiration the Poussin painting “The Gathering of the Ashes of Phocion by His Widow,” Tilbury and Rowe created a spaciously meditative sound environment that seems to move at the measured pace of reflective thought. The focus of the piece falls on Tilbury’s piano lines, which are less lines than intermittent handfuls of resonant notes sounding and fading away—sonic fragments shoring up the piece amid the ruins of silence, giving it a deeply affecting emotional definition and weight.

It’s possible to hear these sounds vanishing into silence as an allegory for the process of working through loss, a gradual process that approaches, but never really arrives at, absolute closure. There’s always some residue that remains, call it memory or the shadow of nothingness that lies across the image we reflect back to ourselves in moments of lucidity.