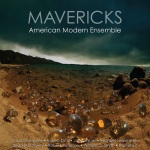 Mavericks is a compilation of (mostly) recent work by eight American composers. Originally presented in the context of a series of concerts in New York in 2007, the ten works here have in some cases been revised and re-recorded since then, though two—Robert Dick’s Sliding Life Blues and Stuart Dempster’s Matthew, Can You Sperry Me Again?—appear here as they were recorded at one of the concerts.

The pieces largely date from 2000 and after, with the exception of Michael Lowenstern’s 1993 Spasm for bass clarinet and electronics, Sean McClowry’s April’94 for double bass and electronics (1994), and the far outlier of John Eaton’s Microtonal Fantasy of 1965, a work for two pianos tuned a quarter-tone apart, to be played simultaneously by one performer. All were selected as showcases for the expanded possibilities open to solo performers on voice and on string, percussion and wind instruments. Accordingly, the ten performances make good use of extended technique, electronic manipulation of acoustic sounds, improvisation, and/or unconventional tunings and notation.

Fully half of the performances include an electronic component, whether in the guise of pre-recorded sound or live processing. For example, Spasm pairs live bass clarinet with pre-recorded sounds derived from the instrument that have been chopped and channeled into beats and other elements of rock and funk. April ’94 runs McClowry’s detuned double bass through loops and other signal processing; this moving work, a program piece written as a kind of elegy to the victims of the Rwandan war of 1994 succeeds, even in the absence of knowledge of its inspiration, as a purely musical piece suffused by a dark, if unconventional, lyricism. William O. Smith’s Sumi-E for clarinet and live computer processing (2000) methodically explores several techniques for, or specific parts of, the clarinet using a contemporary reimagining of the classical exposition-and-variations structure.

The purely acoustic pieces also emphasize the richness of the technical means available to contemporary performers. Komodo (2004) and Piranha (2007), composed and performed by American Modern Ensemble music director Robert Paterson, explore in depth the geography of the five-octave marimba as played with six mallets. Each piece is centered on one end of the instrument’s pitch range, laying bare the harmonic subtleties inherent in the resonances of closely spaced, overlapping tones.

Perhaps the most intriguing concept belongs to Dempster’s performance for unaccompanied trombone. The mostly improvised piece starts from a very simple verbal score consisting of a single sentence invoking the memory of the late Bay Area double bassist Matthew Sperry, who is called down as a kind of unseen performance partner. During his lifetime, Sperry was an inspiration to many improvisers, bassists and non-bassists alike; through Dempster’s work he continues to be. Appropriately, Dempster initially uses the trombone to set up a simulacrum of the sound of a double bass. Spinning a line of legato gravity, he simulates a mid- to low-register arco melody; chords or multiphonics recall the double stops of the string instrument. With the second half of the performance, Dempster creates sounds with an uncanny vocal quality: clearly pronounced vowels, humming, and so on. His compelling performance provides a fitting close to this strong set of new music.