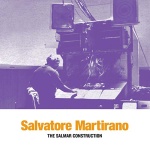 The Sal-Mar Construction, the synthesizer featured on this LP from SubRosa, was an early, real-time electronic composition system conceived by American composer Salvatore Martirano (1927-1995) in the late 1960s.

Martirano’s musical background was varied, having begun with piano and clarinet and a period just after WWII playing jazz. His formal studies included instruction by Luigi Dallapiccola at the Cherubini Conservatory in Florence in the early 1950s, followed by time spent in Rome. He developed an eclectic style of composition and performance informed by twelve-tone method, improvisation, popular music and theater.

Martirano began working with computer music shortly after his move to the music department of the University of Illinois in 1963. The Sal-Mar Construction, heard here in a previously unreleased performance recorded at IRCAM in Paris in 1983, was developed at U of IL between 1969 and 1972 by Martirano and some of the school’s engineers. The synthesizer was designed to control the spectra of digital waveforms and worked through a system of switches controlling analogue synthesis modules. Because Martirano conceived the system as scalable, its controls worked at all levels, from the grains of individual timbres up to the overall structure of a composition.

The IRCAM recording captures a performance by Martirano and consists of a composition of approximately 42 minutes presented in two parts. As might be expected given the Sal-Mar’s architecture, the composition is primarily made up of timbral sculpting, layering and spacing. Structurally, the work consists of sequences of events grouped together by intervening silences that serve as boundaries between them. The events themselves are polyphonic—overlapping individual lines of distinctive sound colors that are grouped and set out at rates of change that emphasize their contrasting qualities. When pitch comes into play it’s often as a glissando or continuum of microtones rather than as lines of discrete tones assembled into a conventional melody. The sound Martirano constructs is engrossing and full of depth—the aural equivalent of one of Frank Stella’s colorful, projective paintings of the 1980s.