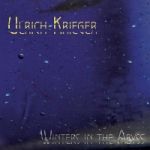 Krieger is a German composer and saxophonist probably best known for having arranged Lou Reed’s notorious Metal Machine Music for orchestra. He often integrates electronic processing into his live performances and compositions, as he does here through the use of close miking and amplification.

Winters in the Abyss, which is part of a larger work called the Deep Sea Cycle, is based on the so-called undertone series. As its name implies, the undertone series—an artificial construction, unlike the naturally-occurring overtone series—is an inversion of the overtone series. In a mirror image of the overtone series, its sequence of pitches is densely packed in the lower register and becomes more spread out the higher up it runs. With its higher density at the bottom and lower densities at the top, the series’ structure parallels the structure of the ocean, its dark, high pressure lower depths giving way in stages to a brighter, lower pressure surface.

The composition, a five-movement work in which each movement represents a stratum of sea depth, is scored for the low brass of trombone (Matt Barbier), French horn (Zara Rivera) and contrabass trombone (Paul Rivera). The movements are sequenced in reverse order with Movement V, Sun Lit, leading off and Movement I, Pitch Black, coming at the end. Arranged this way, the piece depicts a plunge from the surface through the intermediate strata to the bottom.

All five movements are dominated by long-duration tones occurring singly, in pairs and on all three instruments. Given the low ranges of the instruments, the overall sound is relatively dark, even during the Sun Lit movement. Overlapping tones make for harmonies ranging from discordant to consonant; Midnight, the third movement, for example, features frequent major thirds and hints of a dominant 7 chord emerging from mix—a marked contrast to Sun Lit’s more jagged and unsettling tones a half-step or minor ninth apart. And as expected Pitch Black, the features tightly packed clusters of notes with very slow harmonic movement.