In the liner note to Dark Mountains/Distant Lights, an album of seven new and recent compositions of his, Louis Karchin describes one of the pieces as having been inspired by lyric poetry’s capacity to convey the moods and emotional states of an individual sensibility. In fact many of the other works in the collection are lyrical not only in the sense Karchin describes, but also in the original sense of something meant to be sung. This should come as no surprise, given the substantial amount of vocal music, including the opera Jane Eyre, that Karchin has written.

The point of departure for Karchin’s musical vocabulary is the pitch-oriented serial and post-serial composition of the last century. His lines tend toward the complex and highly chromatic, and are characterized by sudden turns and staggering leaps and falls. This is the case for Rhapsody (2005/2011), a work for violin and piano that features a tonally convoluted, register-spanning violin line. Nevertheless, the line has a continuity and phrasing that recall the human voice, and it isn’t hard to imagine it as an aria for soprano. It’s a virtuoso piece breathtakingly played by violinist Miranda Cuckson and pianist Steven Beck.

In addition to her affecting performance on the austerely beautiful Prayer (2004) for solo violin, Cuckson has two duets with oboist Jacqueline Leclair: 2016’s Dreamscape, and 2017’s Reflections. Both are challenging works that integrate extended techniques—multiphonics for oboe, unorthodox bowings for violin—with more conventionally played, though still demanding, passages. Karchin’s decision to pair oboe and violin, whose timbres contrast in the lower registers but tend to converge in the upper registers, is inspired.

Lyrics II (2014)—the piece Karchin was referring to in the liner note—is a two-part composition for solo piano that does indeed evoke the dynamic arc of emotional cycles. 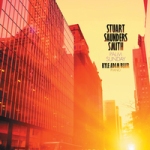 Like the music on Dark Mountains/Distant Lights, the music on Palm Sunday, a collection of works for solo piano by composer Stuart Saunders Smith, is primarily organized in terms of pitch relationships. Smith’s background includes the formative influences of teachers and mentors such as Sal Martirano, who affirmed the value of improvisation, and Ben Johnston, who encouraged Smith’s reliance on his ear and intuition in composing. Smith’s tenure as leader of the REDS ensemble, which performed graphic and other non-traditionally notated open works, is also significant and finds resonance in most of the work on Palm Sunday.

Four of the five pieces on the album—all except for the early work Pinetop, a boogie-woogie inspired piece–are semi-open scores that notate pitch conventionally but leave the specific values for parameters such as phrasing, dynamics and articulation up to the performer to choose. Smith composes melodies that can be knotty and harmonies that are complex, and in Palm Sunday (2012) calls for the pianist to hum, sing, and recite a text along with the music. Pianist Kyle Adam Blair, who realizes the works on this recording, has a long history with Smith’s music and consequently brings a deep understanding of Smith’s methods and expressive purposes to his interpretations. That depth of understanding certainly shows in Blair’s performances, which exert confidence and a strong sense of narrative development.

The lineup from the 2009 Seattle Occultural Music Festival, an event I’d never heard of before, is available:

THIS WEEK AT THE CHAPEL