Three new and recent releases from the Pan y Rosas and Plus Timbre netlabels offer improvised music in trio, overdub and solo formats. Each provides a unique perspective on improvisational practice, and all are worth hearing.

The Argentine trio Mentolados Durruti is made up of Luis Conde on clarinet, bass clarinet and soprano saxophone; Luis Lanes on acoustic guitar; and Carlos Vega on double bass. Their album De aća a cien años [Pan y Rosas pyr287] is a well-rounded collection of music that ranges from the pure timbre of the opening track, with its string- and fingerboard-tapping and key clicks, to the pure counterpoint of a track like Los solidarios. Lane’s pristine fingerpicking and Vegas’ refined arco sound are particular delights, and the perfect offsets for Conde’s creative uses of extended techniques. This is a group with a deft touch for polyphonic music that balances the demands of defined line against atmospheric sonority. 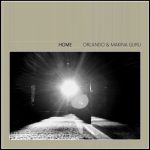 Home, by Brazilian bassist Orlando Freitas, is another Pan y Rosas release [pyr289]. The title of the album is certainly appropriate: recordings of the bassist’s everyday life provide the backdrop against which he layers overdubbed pizzicato improvisations throughout the course of the single 35 minute-long track. Home is built around multitracked counterpoint and variations on density, as Orlando sets out rapid flurries of notes solo and as a virtual duo and trio. His sound on upright bass has the sleek and crackling edge of an electric fretless bass.

Finally there is Fabrizio “Bozzi” Fenu’s Sant’Andrìa, on Plus Timbre [pt099]. Fenu, a guitarist originally from Sardinia now resident in Marseille, France, invents a many-colored sound world for electric guitar augmented by loops, miscellaneous electronic processing, and preparations. In spite of the sometimes abstract nature of the timbres he coaxes from his instrument, he isn’t averse to grounding his improvisations in the occasional steady rhythmic pulse. There’s much of interest here—repeated fragments of melody circling an imaginary center; insistently ringing tones coalescing into chords; microtonal detunings; the reversed decay of notes turned backwards. And beneath it all, the sharply honed edge of the electric guitar’s plain voice.