The Sounds of Now, Part Three: Anthony Braxton and the Ethics of Improvisation by Chadwick Jenkins from 2007 is a very insightful essay that digs into Braxton’s musical philosophy. Jenkins very clearly explains his interpretation of some of the ideas found in Braxton’s Tri-Axium Writings. It is very well written and should be read carefully, and maybe more than once in order to digest Jenkin’s interpretation of Braxton’s writings.

This is a recent performance of Braxton’s Composition No. 1 (1968) for solo piano performed by Brett Carson.

A set of the Anthony Braxton Quartet performing in East Berlin in 1985. The group for this concert is Anthony Braxton, Marilyn Crispell – piano, Gerry Hemingway – drums and Jens Saleh – bass. You can hear the magic that Hemingway, Crispell, and Braxton have together.

In 1973 Bill Smith interviewed Anthony Braxton for Coda Magazine.  Smith removed the questions from the interview so that it reads like an essay.  The interview offers some insight into Braxton’s development as a musician and his determination to be true to himself and his vision, despite the potential consequences. “Anthony Braxton Interview 1973” by Bill Smith.

This is a very good recording of the first set at The Kitchen in 1977 of three of the AACM’s titans – Roscoe Mitchell, Anthony Braxton, and Joseph Jarman.  There is no video but the performance is astounding! The second set is also floating around and worth checking out.

The Instant Composers Pool (ICP) is an independent Dutch jazz and improvised music label and orchestra founded in 1967.  In this short excerpt of a 2005 performance at the Bimhuis in Amsterdam, they are joined by Anthony Braxton. 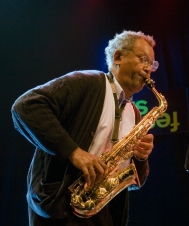 In the last fifty years or so Anthony Braxton has composed hundreds of pieces and recorded well over one hundred albums. Navigating this vast amount of material can be a little bit intimidating. Seth Colter Walls’s article “Anthony Braxton: Ghost Trance Music” is a great place for all to start. This article is an excellent guide that provides a nice overview of Braxton’s work with clear high-level explanations of some of Braxton’s most prominent musical concepts and structures. It also includes links to suggested listening examples.

Among Braxton’s many innovations is his extensive work for solo saxophone such as his landmark 1969 LP “For Alto”.  Here is a short but excellent example of Braxton’s solo saxophone music. The clip is from Hamburg in 1981.

This thirty-minute clip features a 1973 performance from one of Braxton’s many quartets. This may be the first live performances of his compositions 23B and 23D. The quartet is Kenny Wheeler – trumpet and flugelhorn, Jean-François Jenny-Clark on Bass, Charles “Bobo” Shaw on drums and of course Anthony Braxton – flute, contrabass clarinet, and alto saxophone.

Join us again next week for another post as AMN Celebrates Braxton 75.

“Magnetic Voices From The Unseen” is the first album from Renaud Bajeux. It is available as an LP or as a digital download. The digital edition contains an additional live track. Renaud Bajeux is a sound engineer and cinema sound designer based in Paris. Bajeux has been regularly collaborating with the INA-GRM for the last ten years and has a GRM commission receiving its world premiere at the GRM’s Akousma Festival in Paris this week.

For “Magnetic Voices From The Unseen” Bajeux primarily works with sound material he discovered in the magnetic fields of various electronic devices. Armed with magnetic coils he explores the sounds of things found on most people’s desks like hard drives, computers, cell phones and monitor screens. While the sound sources may be novel, it is Bajeux’s imaginative way of transforming these sounds into a series of noise-laden soundscapes that makes this debut album so interesting.

The four pieces on this album have a cinematic feel, filled with subtle to surprising developments as they progress. Bajeux’s compositions straddle elements like noise, harmonicity, glitch, experimental, electronics, minimalism, and ambient sound without ever really succumbing to any of those elements in terms of overall style.  “Magnetic Voices From The Unseen” is a wonderful debut album!

Sound American is an online music journal that trumpeter, composer, writer, Nate Wooley began publishing in 2012. The journal generally focuses on radical experimental music. Each issue is organized around a topic or theme. Sound American’s content is as serious and as high quality as any music oriented academic journal but without any of the trappings of academic writing. Contributing writers are critics, musicians and thinkers whom are able to communicate their ideas in plain language.  Issues have focused on musicians such as Anthony Braxton, John Cage, Pauline Oliveros, David Dunn, Don Cherry, Christian Wolfe, and Cornelius Cardew. Topics such as Gospel Music, Networking, Instrument Building, Ritual, Jazz, and Propaganda have been explored.

The current issue Sound American No. 21 “The Change Issue” is a bit of a departure from the previous volumes. Nate Wooley remains the editor but has expanded the operation in terms of organization and formats. Behind the scenes Sound American has now expanded to more of an institutional framework with both advisory and editorial boards. Along with the freely available web version there are now print, print and audio, and digital subscription formats. The high-quality print format of Sound American No. 21 “The Change Issue” is beautifully done. The issue features words by or about Jeremy Toussaint-Baptiste, Ornette Coleman, Nicole Kaack, Bradford Bailey, G. Lucas Crane, Jennie Gottschalk, Ambrose Akinmusire, Mats Gustafsson, Peter Margasak, Terry Riley, Kim Brandt, John Cage, Josh Sinton, Edgard Varése, Marc Hannaford, John Zorn, Matthew Mehlan, Million Tongues Festival, Alex Mincek, Lester St. Louis, and Steve Lehman.

Sound American is a great resource for anyone interested in experimental music. I find the journal’s writing to be passionate, informative and thought provoking. Each issue invites readers to explore new sounds and new ideas written by some of today’s most interesting writers, thinkers and musicians. Visit the site and check out the current issue. Browse the archive of back issues. You will most likely find yourself visiting the site again and again. If you find Sound American to be as valuable as I think it is, then please consider subscribing.

Designed by Mike Dyer of Remake Designs (designer of the recent Donald Judd: Writings publication), each issue is:
– Printed using offset lithography in a special Pantone color throughout (which will change each issue)
– Bound with the highest quality thread-sewn binding, using cold glue and Otabind™, so the book lies open and stays completely flat, and will last for a lifetime.
– Printed on Holmen paper, an excellent Swedish stock
– Printed by die Keure, one of the finest book printers in the world in a limited edition of 500

Each issue of “SPECTRES” will have a different subtitle / focus.  “This book has been conceived as both a prism and a manual. Following the “traditional” arc of electroacoustic composition (listen—record—compose—deploy—feel), each of the contributions collected together here focuses in on a personal aspect, a fragment of that thrilling territory that is sonic and musical experimentation.

Although the term “experimental music” may now have be understood as referring to a genre, or even a particular style, we ought to hold on to the original use of this term, which was based more on an approach than on any particular aesthetic line to be followed. The experimental is first and foremost a spirit, the spirit of the exploration of unknown territories, a spirit of invention which sees musical composition more as a voyage into uncertain territories than as a self-assured approach working safe within the bosom of fully mapped out and recognized lands.”