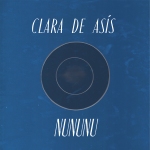 Nununu is Marseille-based experimental guitarist Clara de Asís’s twenty-four minute, unedited single-take improvisation for prepared electric guitar. A continuously evolving soundscape, the piece begins with a low-key electronic hum or murmur that at times sounds like the rush of wind through telephone wires or the throbbing of airplane propellers high overhead. From there de Asís builds reverberant sound blocks into a thickness of layered echoes which eventually converge into a buzz and an unsettling, suspended chord punctuated by the metallic chiming of struck strings.

Caroline Park, whose 2013 release Rim explored the sonic products of generative compositional processes, here presents five pieces that begin with minimal musical materials which accumulate into larger structures through repetition, superimposition and variation. In Being States Park creates changing harmonic patterns by layering a handful of brief motifs of a few notes each; the larger melodic aggregates that result take on unpredictable shapes by virtue of the differing lengths and cycles of the constituent motifs. Plantlife and A Moth Is Born are made up of somewhat harsher sounds, the former sending its elongated tones riding out on a wave of static and the latter consisting of siren-like, dissonant glissandi. Fractured Barnacles is constructed around a pulsing sequence of changeable speed, while Gldufgsld closes the collection with a floating, consonant chord.