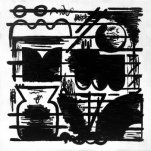 “Gran Sasso” is Matteo Liberatore’s second solo guitar album.  It is the follow up to his excellent 2018 debut “Solos”.   Unlike “Solos” which focused on extended techniques on the acoustic guitar, “Gran Sasso” is a single extended piece for solo electric guitar using somewhat more conventional techniques. Having said that “Gran Sasso” is less of a departure from “Solos” as it is more of a glimpse into Liberatore’s musical imagination.

“Gran Sasso” is without any overdubs and other than some reverb and extensive use of the volume pedal, it is void of electronic effects. It is a very imaginative piece that has an open atmospheric quality in which Liberatore explores shape, texture, space and color. His dropped guitar tuning gives him a big open sound. Liberatore’s tone is bright and clear and has just a little bit of chime. “Gran Sasso” unfolds in unusual ways; the piece seems to continually shift from moment to moment.  But all the while Liberatore’s playing sounds both intentional and reflective giving this piece its own character.

“Gran Sasso” is a wonderful modern electric guitar record and is something I have found myself replaying over and over again. It was recorded and mixed by Matteo at his home studio and was mastered by Elliot Sharp. “Gran Sasso” appears to be a digital only release so head on over to Bandcamp and check it out.