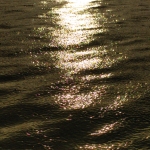 Sandy Ewen is an experimental guitarist. But even that label gets stretched a bit on You Win (a play on her last name and a phrase that often signals the end of an argument), her latest release that is coming out in April on Gilgongo Records. Here, in the spirit of Derek Bailey, Keith Rowe, and Henry Kaiser, we have a solo electric guitarist creating a sound sculpture that only hints at its source instrument.

Ewen sets forth a textured base of distorted elements that evoke a post-industrial environment. Clearly, these were generated from the liberal use of extended techniques rather than anything resembling traditional picking. Some extent of processing may have been applied as well, perhaps looping or delay. She also overlays feedback and other voices. From time to time, one can make out a plucked or hammered string, pick scraping, a fretboard slide or some other sonic component that suggests “guitar.” But the album as a whole is a gritty sound collage with more in common with electroacoustic composition than guitar heroics. The overall levels are low, which means that you have to crank up the volume to appreciate the depth of Ewen’s art – with the acceptable risk of an occasionally jarring blast punctuating the atmospherics.

But above and beyond what might otherwise be lumped into the broad category of free improvisation, You Win exhibits an uncommon intentionality. Ewen is telling a story with a beginning, middle, and end. Despite its open-ended and non-linear nature, the album has patterns that you can latch on it if you listen closely enough.