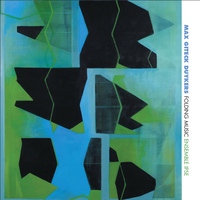 In addition to being a composer, Max Giteck Duykers (b. 1972) is the co-founder of the Ensemble Ipse, which is featured on this collection of Duykers’ new and recent work for chamber ensembles. All of the pieces in the collection are scored for the so-called Pierrot sextet or its subdivisions, the Pierrot sextet, of which Ensemble Ipse is one, comprising piano, clarinets, flutes, violin, cello, and percussion. (The name derives from the quintet used in Arnold Schoenberg’s landmark 1912 work Pierrot Lunaire.) For such a small group it contains a surprisingly wide variety of instrumental colors, which Duykers ably exploits.

Duykers has written a number of works for the full sextet, two of which appear on Folding Music. The title track is one; it was composed in 2017 and opens the album. Duykers plays with the sextet’s color possibilities by breaking the group down into various subgroups of contrasting timbres; he distributes the piece’s thematic material, much of which consists of cells made up of a limited number of pitches, across the ensemble for maximum effect. The music has an ambiguously tonal sound to it—not quite inside and yet not quite outside either. The same is true of the other sextet on the album, 2007’s Twilight for Adored and Breathless Moments. Opening with an insistently hammered chord, it’s characterized by lively rhythms in changing meters and quasi-serial melodies allocated across winds and strings. Here again, Duykers’ effectively breaks the ensemble down into mutable subdivisions in order to create an engaging series of timbral harmonies and dissonances.

Other pieces on the album include Dark Body (2015), a quartet for flute, violin, cello and piano that’s notable for the violin’s astringent, chromatic lines and the flute’s uses of extended technique, and The Way In (2015), a setting of Robert Bly’s translation of the Rilke poem “The Way In,” arranged for soprano, piano and cello.