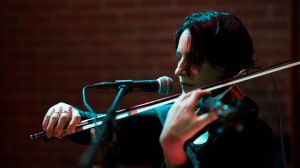 big dog little dog Album Release Show
with Special Guest Travis LaPlante
6/3/19, 7:00pm
Join big dog little dog (composer/violinist Jessie Montgomery and bassist/composer Eleonore Oppenheim) for the release of their debut album on New Amsterdam Records.
big dog little dog is the mild-melding duo project of violinist/composer Jessie Montgomery and bassist/composer Eleonore Oppenheim. Their music has been described many ways, but perhaps the most apt so far has been “post-minimalist groove americana.” The pair use an improvisational composition technique that draws on many genres and their experience as native New Yorkers to create lush, cinematic soundscapes that are by turns sweeping and achingly intimate. Saxophonist and composer Travis LaPlante (Battle Trance) will open with a special solo set.

Jay Vilnai – Thorns All Over Release Party
6/6/19, 7:00pm
Composer Jay Vilnai celebrates his new album “Thorns All Over”, contemporary murder ballads penned by poet Rachel Abramowitz, with acoustic performances and tracks from the album. Mezzo Augusta Caso will perform Vilnai’s “There’s a Bluebird in My Heart” for voice and tape, based on the poetry of Charles Bukowski, with new video art by artist Bill Mazza.

Desdemona
6/7/19, 8:00pm
Desdemona is a New York City-based ensemble devoted to creating unique and inventive performances. Founded by Adrianne Munden-Dixon (violin), Carrie Frey (viola), Julia Henderson (cello), and Margarita Rovenskaya (piano), the group presents repertoire spanning from the Renaissance to world premieres in a variety of formations, from duos to piano and string quartets. Described by the New Yorker as an “excellent young quartet,” Desdemona has performed at Spectrum, 1 Rivington, Cornelia Street Café, the CUNY Graduate Center, Princeton’s Unruly Sounds Festival, as well as at numerous home gatherings through Groupmuse.

Shepherdess
6/9/19, 6:00pm
Shepherdess is a duo based in New York City, featuring violinist, Hajnal Pivnick, and mezzo soprano, Kayleigh Butcher. Hajnal and Kayleigh are both contemporary classical performers dedicated to commissioning and disseminating new works by living American composers. For this concert, Shepherdess will be showcasing a few new works from NYC based composers Lester St. Louis and Mary Prescott as well as some pieces by Bethany Younge, Annie Hui-Hsin Hsieh, Annika Sokolofsky, Luis Amaya, and more!

GalloFlórez Duo: Algo Más Melódico CD Release Party
6/12/19, 7:00pm
Ricardo Gallo, piano
Alejandro Flórez, tiple and bandola
In this new release by GalloFlórez the clear allusions to Colombian Andean musical folklore from the previous album are artfully shrouded by layers of rhythmic and harmonic richness, rendering the music more expansive and visceral. Lyricism is present throughout, whether in the angular twists of Emisarios or Algo Más Melódico, the colorful and irregular phrases of Hermetismo (inspired by Hermeto Pascoal’s similarly virtuosic melodies and harmonies), the unlikely, dystopian soundscape of Acueducto or their heartfelt rendition of Andrew Hill’s Nefertiti, the only cover of the album, which ironically reminds the listener of the primary influences of the duo. This is a mature effort by a team of composers/improvisers who move effortlessly in the worlds of jazz, contemporary and South American music, creating an intriguing and enchanting aesthetic.

Ken Thomson Sextet//Bearthoven
6/16/19, 5:00pm
“Few musicians travel as assuredly and meaningfully between jazz and new music as saxophonist Ken Thomson.” – Chicago Reader. Ken Thomson’s (Bang on a Can, Gutbucket, Asphalt Orchestra) Sextet performs a rare Brooklyn show featuring music written since the group’s debut CD, released Fall 2018, which was listed as Best of 2018 by Second Inversion and AnEarful, and of which WNYC writes, “they manage to create a sound much bigger and juicier than the sum of their parts” and the NYC Jazz Record calls “immensely enjoyable, thrilling.”

In Dreams
6/16/19, 8:00pm
This program dives into the hope and discomfort of dreams, the moments when we let go and imagine a thing wouldn’t name when we’re awake. When we started thinking about this program, we began with Houtaf Khoury’s “Apres un reve” (2008), a modern nightmare reacting to the terror of relentless war in the Middle East: a dream of hope amidst the fatigue of fear. Hasan Ucarsu’s “…the city of anachronistic nostalgia, Istanbul…” (2003) celebrates his and Derin’s hometown of Istanbul, a city rich in contradictions and layers. Our adaptation of Claude Debussy’s “Bilitis”, a collection of 12 sensual poems attributed to Sappho, dreams of desire. Finally, Michael Fiday’s “Nine Haiku” (2007) is one of our favorite pieces to perform and sets works by 8th century poet Basho with flashes of powerful images, dreams that come into focus for only a moment before they vanish.

Either/Or Ensemble
6/18/19, 8:00pm
Winner of the 2015 CMA/ASCAP Award for Adventurous Programming, Either/Or is a flexible chamber ensemble based in New York City that presents a repertoire of new and recent chamber music informed equally by American Experimentalism and European avant-garde practice, with special emphasis on artists outside the institutional mainstream and on works exploring nontraditional ensemble formations. Directors Richard Carrick (conductor/piano) and David Shively (percussion/cimbalom) curate its programming, drawing on a broader collective of 17 regular soloists (and guests) to realize the unique requirements of each project. Since its founding in 2004, Either/Or has premiered more than 125 works (as well as dozens of student compositions), toured throughout the US and Sweden, and recorded for labels such as New Focus, New World Records, Starkland, and Sterling Classics.