Source: Vision Festival. June 11-16 are the dates for one of the world’s premier festivals. The lineup includes:

Source: Resonance: Fear of the Object.

ADMISSION:
$10. No one turned away due to lack of funds. All ages are encouraged to attend.
Tickets: resonances.ticketleap.com/fear-of-the-object/

SYNOPSIS:
Fear of the Object: Artist Statement:
Fear of the Object is a site-specific event utilizing live video and sound performance to put into dialogue the architectural resonance/dissonance found within physical space, sound and light. Percussionist Chris Cogburn sets into motion resonant objects (cymbals, bells, snare drum) in relation to Taxt’s subtle textures and fleeting harmonics on the micro-tonal tuba. Cellist Judith Hamann investigates various pulsing or vibrational aspects of playing, including rhythm, tremor, vibrato, and wolf tones— overtones that occur when a bowed note matches the resonating frequency of an instrument. A range of sine tones set to perfect ratios for each object’s unstable harmonics augments tensions between the acoustic and the electronic. Audio generated video projected from Bjørgeegen is fed back into sound to blur distinctions between hearing and seeing. Physicality turned aesthetic without the beautiful. 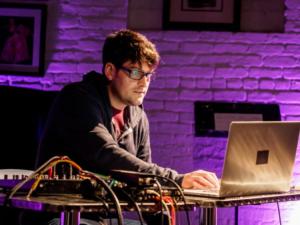 Chicago based composer/laptop improviser Sam Pluta has been developing a completely personal language for the better part of the past two decades. A professor at the University of Chicago, he has worked closely with Peter Evans, George Lewis, Jeff Snyder and Evan Parker. He is a member of the Wet Ink Ensemble and is a co-founder of Carrier Records. He’s also a really funny and likable guy and today’s talk is a good one.

The Waste of Space Orchestra – Syntheosis

Composer, pianist, organist and vocalist Amina Claudine Myers sat down to talk with Hillary Donnell about some upcoming projects, her most memorable collaborations and her time in the Association for the Advancement of Creative Musicians.