VIJAY IYER AND CRAIG TABORN at Roulette (March 12, 8 p.m.). Two leading jazz pianists in their late 40s, Iyer and Taborn each have their own specific formulas, but both are built on a mix of studious abstraction and propulsive weight. Next week they will release their first album as a duo, the expansive, richly improvised “The Transitory Poems,” on ECM Records. The crystalline scatter of Taborn’s playing meets Iyer’s slightly thicker articulation in a sympathetic repartee; the pair seem to constantly divert their own path. They celebrate the album’s arrival at this concert, playing on two grand pianos.
917-267-0368, roulette.org

‘IDENTITY: FREEDOM’ at the Kitchen (March 7-9, 8 p.m.). The nonprofit organization Arts for Art organized this series of concerts to highlight some of free jazz’s most respected elders, all of whom are presenting suite-length original works here. The festival begins on Thursday with “Trail of Tears Continuum (1492-2019),” a 90-minute piece composed by the bassist William Parker (a founder of Arts for Art) featuring singers, poets and a five-piece instrumental group, as well as a film component. On Friday, the pianist Dave Burrell debuts “Harlem Renaissance,” a response to the life and work of the dancer Josephine Baker; Burrell’s sextet will play in conversation with two dancers, Marguerite Hemmings and J’royce Jata. The series concludes on Saturday with a presentation of Andrew Cyrille’s “Haitian Fascination” project, in which this storied drummer fuses the music of Haiti — his ancestral home — with avant-garde jazz.
212-255-5793, thekitchen.org

MIYA MASAOKA at the Park Avenue Armory (March 13, 7 and 9 p.m.). Masaoka’s style on the koto, a long, stringed instrument from Japan, bespeaks deep equanimity: She is comfortable allowing vast amounts of open space — playing quietly, just a few notes at a time — but within that serene composure she strategically builds a feeling of tensile anticipation. You can lie down and stretch out inside her music, but you can’t ever get completely comfortable. An eclectic collaborator across the worlds of traditional and avant-garde music, at the armory she debuts “The Long Arc of Time,” a work inspired by traditional Japanese Buddhist chants and by the poetry of Tracie Morris. The performance will feature Masaoka alongside fellow Japanese and American musicians and the soprano Kamala Sankaram.
212-616-3930, armoryonpark.org

LOU REED DRONES at the Cathedral Church of St. John the Divine (March 13, 6:30 p.m.). Physics and music nerds, unite and rejoice! The moment you have been collectively awaiting has arrived: A handful of Lou Reed’s guitars, curated by his technician Stewart Hurwood, will be arranged against a stack of amplifiers and tuned to create a glorious noise that will morph as you wander about in this acoustically splendid cathedral. Holy feedback! It should be glorious.
stjohndivine.org/calendar

Sound recordings of multimedia events always present something of a conundrum: although a necessity for documenting the work, they necessarily leave some of it out. It’s a situation brought to mind by Cecelia Lopez’s Red/Machnic Fantasies, a 2-CD set capturing the audio of two mobile sound sculptures/installations by the Buenos Aires composer/electronics artist. Red, which makes up the first disc, is a three-movement, textural feedback piece for contact microphones and speakers embedded in a suspended net made of cables. As the net swings and wobbles, it sets up changing feedback relationships between the microphones and speakers. The second CD contains Machinic Fantasies, a cyclic, pulsating work for electronics and acoustic instruments. The mobile element in this work is provided by two “spinners” who hand-turn two large, perforated drums containing speakers. An array of microphones and speakers is positioned inside and outside the drums. The work’s source material includes recordings as well as live sound from trumpeter Joe Moffett and trombonist Christopher McIntyre. Although the recording does a good job of documenting the audio side of the two pieces, the performance and sculptural aspects of both Red and Machinic Fantasies seem to demand that the two works be experienced live in order to be enjoyed in all of their dimensions. 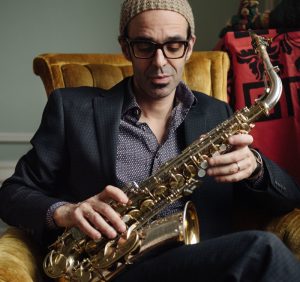 Source: Sound It Out!

This double-bill presents electric bassist/guitarist Simon Jermyn’s debut as a leader in the Sound It Out series. The first half of the evening at Greenwich House features the Dublin native on guitar in his Sooner duo with Charlotte Greve on alto saxophone, electronics and voice, plus special guest Joe Branciforte on live processing and synth. The second set will find Simon leading his quartet Trot-a-Mouse, featuring him on bass guitar, Charlotte again on alto sax, Anna Webber on tenor sax and Mark Ferber on drums. Pointing out that Simon’s recordings with Trot-a-Mouse have placed him “at the vanguard of American improvised music,” the Irish Times has said: “To call Simon Jermyn a guitarist, or a bassist (his hybrid six-stringed instrument resembles both), barely hints at the range and subtlety of his musicianship. In a wider sense, Jermyn is a musical instigator, and his real instrument is his band.”

This double-bill presents the return to Sound It Out of a series favorite: alto saxophonist Michaël Attias, who will be celebrating the release of his first solo album, échos la nuit. Some of Michaël’s initial solo performances — on alto and piano, virtually simultaneously — were at Greenwich House as part of Sound It Out. In addition to his opening solo set, Michaël will be leading a version of his ace Quartet with Kris Davis (piano), Sean Conly (double-bass) & Satoshi Takeishi (drums). The New York Times has described Michaël as “an emphatically cosmopolitan saxophonist and composer.” On alto, Attias offers a tone of piquant lyricism, while his compositions are serpentine and darkly alluring, with melodies fit to charm snakes; the rhythms offer surprise at every turn, the textures as sensual as night. The Village Voice described Michaël’s music-making this way: “perpetually shifting tunes, richness of timbre and a singular personality – you can almost see his music expanding and contracting.”

Pianist Andy Milne — whom The Guardian aptly describes as “a superb pianist of Herbie Hancock-like fluency” — makes his long-awaited return to the Sound It Out series with his trio Unison, featuring bassist John Hébert and drummer Clarence Penn. The show will also include colorful guest spots by koto player Yoko Tamaki, cellist Hank Roberts and trumpeter Ralph Alessi. A former student of Oscar Peterson who went on to work with artists from Steve Coleman to Cassandra Wilson, Andy leads both acoustic and electric bands as well as regularly collaborates with dancers, visual artists, poets and filmmakers. All About Jazz has praised Andy’s “sophisticated… sterling musicianship,” with the pianist saying that his piano-trio philosophy resides at “the intersection between texture and groove.”

William Basinski
On Time Out of Time 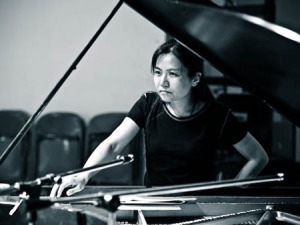 Pat O’Reilly is a musician, composer, and dabbler. After missing a beat on a simple cowbell part during a performance at Carnegie Hall, he decided to take an extended hiatus from music. Years of on again off again quiet work lead to this digital EP.

filament marks the first solo release by petra, the “homegrown voice-electronics” project of Kristina Warren (Providence, Rhode Island). Composed, recorded, and produced over nearly three years starting in 2016, filament is a line, an idea, something continuous, something made, a journey. Voice speaks via electricity. petrabuilt the machine and sewed herself into it.

filament is in part a distillation of Warren’s years of voice and electronics performance, both solo and with collaborators including Ailís Ni Ríain, Amy Brandon, Kimberly Sutton, Rachel Devorah, and Theresa Wong. Across the 2010s and especially during her PhD work at the University of Virginia, Warren got sick of conventional notions of vocal beauty and listenability, which are gendered and limiting. Now on the eve of a new decade, filament aims to make space for new voices, for listening and empowerment. petra’s scream dissolves into voltage, an old ritual that won’t stop.