Before recording this album, baritone saxophonist and bass clarinetist Josh Sinton took a break from music for a few months. Whether Making Bones (full title: making bones, taking draughts, bearing unstable millstones pridefully, idiotically, prosaically) benefitted from this hiatus is only known for sure by Sinton himself. But as listeners, we can speculate that it did.

While he is another one of the many New-York-based creative musicians that has played with just about everyone (Ideal Bread, Nate Wooley, and Anthony Braxton to name just a few), for this new trio Sinton is joined by cellist Christopher Hoffman (Henry Threadgill, others) and drummer Tom Rainey (credit list is way too long). With such esteemed and self-reliant colleagues, Sinton can relax and focus on writing and his own playing, which manages to be both muscular and emotional.

The bari sax gives Sinton’s lines an organic feel as he leads the trio through complex punctuated melodies. Rainey goes with his usual active approach, providing unexpected rattling beats through each of the nine tracks. Hoffman, who is woefully under-appreciated as both sideman and leader, performs heroics on the cello, complementing and contributing to Sinton’s leads.

These stylings are apparent on Tiaga, where Sinton makes his instrument vocalize through an aggressive, driving lead while Hoffman and Rainey phase in and out of rhythm. On Blockblockblock all three partake in a disjointed improvisation around a rough and angular structure. But even the more downtempo pieces exhibit a non-linearity that is both intriguing and poignant.

While ostensibly a jazz trio, Making Bones goes way beyond that designation. Another great release from Iluso Records, a label that should be getting much more attention.

Ten visual artists and composers living and working in the UK each receive £60,000 over three years with no strings attached, making this the largest and most flexible award for individual artists in the UK. Among this year’s awardees is PAUL DUNMALL.

– To encourage artists to continue to practice despite outside pressures, financial or otherwise.
– To support visual artists and composers, across the broadest range of practices and genres. 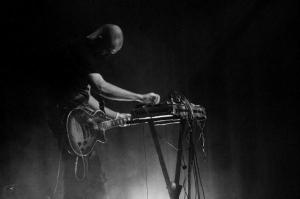 The Way Ahead
BELLS, GHOSTS AND OTHER SAINTS