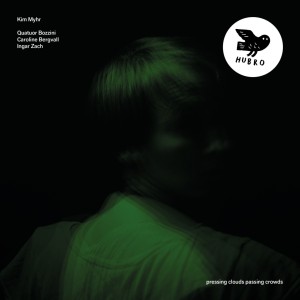 Few notions encapsulate the human condition more tidily than the notion of passage: of passing to different places or stages of life, or simply passing through in any of its literal or figurative meanings. On pressing clouds passing crowds guitarist/composer Kim Myhr has collaborated with poet Carolyn Bergvall on a suite of pieces touching on passage and transience in their many manifestations.

The music, which was written before Bergvall’s words were composed, is performed by Myhr on twelve-string guitar and Ingar Zach on percussion, along with the string quartet Quatuor Bozzini, from Montreal. In a structural allusion to passage the six parts of the suite segue naturally from one to the other, and feature repeated figures, ringing chords and arpeggios over insistent rhythms; for the Bozzini there are restrained drones and elongated, unstable chords with subtly rising and falling inner voices. Myhr’s penchant for repetition underscores the spirit of Bergvall’s text: repetition, as the recurrence of something that by itself doesn’t last, is simply the other side of flux. By the same token, Bergvall’s text is well-suited to the music: through images, anecdotes and aphorisms, she crafts an anti-narrative of what it’s like to experience the passing nature of things—in her words, to “move into unknown terrain where the ground is imperceptibly changing.”

Jonas Cambien Trio
We Must Mustn’t We (Clean Feed Records)

Dialectical Imagination
Two Infinitudes; The One You “see” and the One That Is You. (Leo Records) 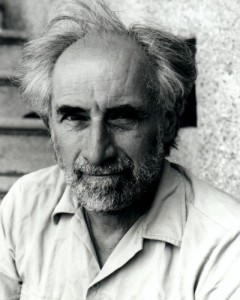 LEILA BORDREUIL
The Kitchen presents Leila Bordreuil’s Piece for Cello and Double Bass Ensemble II, the newest in her series of compositions for amplified cello and six double-basses, which she began in 2015. This work will feature her largest and loudest ensemble yet, creating a violent wall of sound as she uses varied amps and microphones to give immense proportions and unrecognizable textures to acoustic instruments.
Tuesday, November 20 & Friday, November 21 at 8:00 PM
Tickets $15, $12 members
The Kitchen, 512 West 19th Street, New York, NY

What’s all this fuss about saving the Hideout? It’s the little bar that’s standing its ground amid a rising $5 billion tide of corporate buildings and music venues that are supposed to transform Lincoln Yards, a once largely overlooked pocket of land in Chicago’s North Branch industrial corridor, a few blocks east of the Kennedy Expressway. Development projects of this scale typically have little use for Prohibition-era taverns that have been repurposed as small-scale music venues.

For most of the last century, Chicago has been home to fiercely independent labels and clubs outside the network of multinationals that dominate the music and concert industries. The city owes much of its cultural diversity and richness to these small businesses. Yet it’s precisely because they operate outside the big corporate business template that recent Chicago administrations envision as key to the city’s future, that they are viewed as expendable.

These three composer/performers collectively explore the multifacted history and sonic potential of the electric guitar.

Alan S. Tofighi is an interdisciplinary artist who lives and works in Valencia CA. His work deals with analyses of the dispersion, obfuscation, and deformation of information. As a musician he emphasizes free improvisation, with occasions of written work. Synthesis, just intonation, acoustics, preparations, non-formulaic scordatura, extended techniques, and conceptual grounding are all central concerns.

Maxwell Denney is a member of Soup New Music and a founding member of Washington DC’s Beat on the Bard Theatre Company where he still serves as Music Director. His work primarily focuses on harmonic fields, and the slow shift of focus within those fields over time.

Soundwaves is a concert series presenting artists who appear on the DRAM (Database of Recorded American Music) streaming service. The Santa Monica Public Library is the first public library to offer this service to its cardholders. Listings of past and upcoming Soundwaves shows as well as sound and video recordings are at SoundwavesNewMusic.com

Admission is free and all are welcome. Seating is limited and on a first-arrival basis.