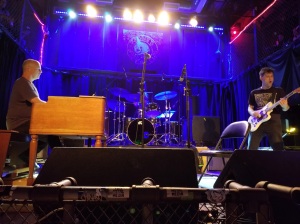 John Zorn does not visit Chicago all that often, but last night was his first of two appearances within a month. Zorn was joined by his organ-driven technical metal band Simulacrum for 90 minutes of intensity at Reggie’s Rock Club in the South Loop. Prior to the show, there was some uncertainty as to whether Zorn would actually perform, and if so for how long. In the past, he has relegated himself to the role of composer and watched from backstage as others perform his works, maybe joining in for a few minutes of improvisation at most.

But at 9pm sharp, Zorn walked onto the stage alone, dressed in his usual camo pants with beat-up sax in hand, and broke into a rapid-fire wailing. After some banter with the crowd and the people running the venue’s sound about buzzing from the monitors, he continued through a solo set full of angularities and extended techniques. Then, calling Simulacrum drummer Kenny Grohowski out, the two performed a joint improvisation in the same style for several minutes. The band’s organist, John Medeski, then joined in. This seemed to trigger Zorn to switch to a more melodic and plaintive approach. After about 25 minutes from the start of the show, Simulacrum’s final member, guitarist Matt Hollenberg hit the stage. This was Zorn’s cue to leave, and the trio took over for the remaining 70 minutes.

Simulacrum plays Zorn’s compositions and arrangements, though this might not be apparent at first. The group certainly hit all the high points that a progressive metal or math rock outfit might focus on – heavy riffing, pounding rhythms, and rapid-fire leads. But as you peel the Simulacrum onion, differences emerge. The most apparent is the non-traditional use of organ instead of bass guitar. Medeski covered both basslines and swirling leads, not to mention sweeping chords. Placed higher in the mix live than on recordings, his contributions were more apparent. He and Hollenberg often doubled up on melodies but complemented each other as well. Grohowski was an octopus behind the drum kit, his casual bearing belying a near-overwhelming intensity. His non-stop action encompassed virtually every spare second with a break, fill, or muscular double-bass work. 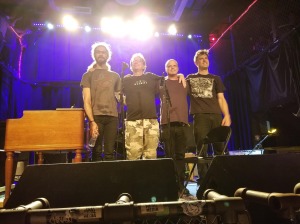 But hidden within Simulacrum’s overpowering presence is Zorn’s distinctive writing. After the audience was flattened by a Medeski / Grohowski rhythm, Hollenberg would peel off a Middle-Eastern tinged melody that would fit into Zorn’s Masada or Book of Angels oeuvre. The group stuck mostly to the material on their self-titled first release from 2015, but included two or three tracks from their latter five albums.

After a brief encore, Zorn joined the trio for a bow to solid appreciation from the crown of about 120. As alluded to above, Zorn announced that he will be returning to Chicago for six hours of performances at the MCA on September 9, featuring 12 different ensembles that pair his varied compositions with paintings.