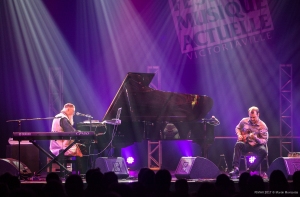 For half a century, Terry Riley has found himself filed alongside fellow American composers such as Steve Reich, Philip Glass and John Adams, whose minty-fresh minimalism sounds as if it has been plotted out on graph paper. Riley’s music is, in the best possible way, often much messier than that of his peers, and it seems to have become even more gleefully chaotic in recent years. The minimalist rigour is there, but it has been warped and reshaped by Riley’s multiple interests, not least his love of Indian ragas, Balinese gamelan, west African percussion and jazz. It reminds us why the Who’s Pete Townshend, a fan of Riley’s work, once said “the only thing minimal about Riley’s music is the limitation of the audience”.