After listening to three nights of more cerebral European jazz that preceded this gig, Starlite came out like a house on fire, with an avant-rock wall of sound and saxophonist Alberts laying melody lines over the tumult. There was just no way to hear the passenger jets that flew low overhead during previous concerts preparing to land at the nearby airport. Saft was flying high, playing joyous sustained chords and roaming the keyboard on a first-generation Hammond B-3 organ – a sound I would qualify as Saftig, meaning juicy or succulent in Yiddish. Bassist Flaten then fell to his knees and fiddled with some electronica to add texture to the canvass as Saft switched to Fender Rhodes keyboard for an avant-jazz excursion, the four musicians laying out separate tracks, all seeming to fold together as one.

The concert continued along these lines, with saxophonist Alberts switching to tenor, then back to alto, with high volume the norm in varying degrees of intensity. Saft played some lovely melodies on steel lap guitar, adding a quasi-Hawaiian flavouring to the ensemble as he encouraged drummer Nilssen to continue powerful polyrhythmic drumming. The encore began with a quote from Ornette Coleman’s Lonely Woman, a beautiful song, in tribute, perhaps, to his harmolodic philosophy. The concert was improvised, though a few riffs were from the group’s two CDs. 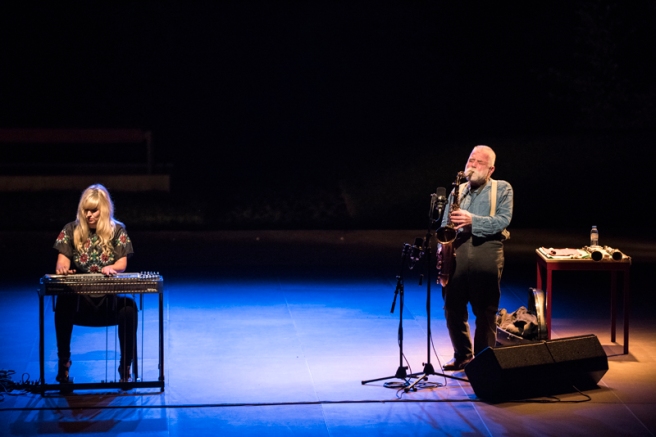 On Monday night, the trio of European free jazz shows began with German avant saxophonist Peter Brötzmann in an unusual pairing with American Heather Leigh on electric pedal steel guitar. They are on tour. As Leigh developed some shimmering, drone-like, and dissonant sounds, Brötzman poured out short bursts on tenor, and she then injected texture by scratching sounds on the strings. Brötzman, now 76 and still very much a musical powerhouse, made a gritty melodic statement, and Leigh returned to lay out a melodic and textural canvas, using the guitar’s pedals to shift tones.

As would be expected, the saxophonist was the dominant presence, though he was much more lyrical than in previous outings – he could be heard singing as he blew his horn –, calling up melodies and alternating on clarinet while Leigh added texture and dissonant notes. He ended the concert playing melodies, a tender offering from a musician associated since 1968 with a fierce attack and staccato blasts. 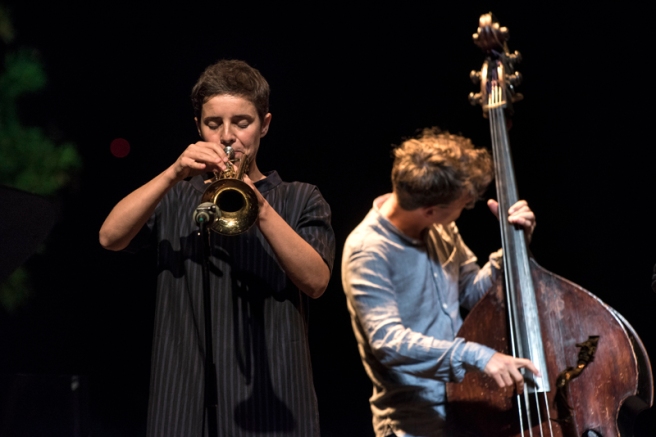 It felt like stream-of-consciousness for the ear, the musicians setting out on a voyage of discovery, searching each other out, seeking ways to enhance, accentuate, or contrast, especially with the trumpet and saxophonists playing into and alongside each other. Though improvised, their hour, with high-points of intensity followed by denouement, and consistent and meaningful interaction made it all sound like a suite.

The Sudo Quartet of improvisers came on strong Wednesday night, as Portuguese violinist Carlos Zingaro, French bassist Joëlle Léandre, Italian trombonist Sebi Tramontana, and German drummer Paul Lovens immediately established their collective presence in a display of density and unity. When trombonist Tramontana started to dance around his spot on stage, exuding some unusual sounds from his horn, and then pushed out a flurry of notes as bassist and drummer began to play off each other, it was a sure sign that a wild night lay ahead.

When ensemble musicians saw openings, they took them, offering original sorties to move the group sound ahead. Léandre at one point began shouting as she played bass, later chanting as part of her exploratory effort

Tramontana wailed away on his horn, with violinist Zingaro matched the sound and bassist Léandre supported their track, unusually using both hands to strum and pluck. The whole thing sounded like a Miro painting ­– many disparate parts on the canvas, but they have a cumulative and meaningful effect. Certainly, his trombone antics – growls, snorts, warbles, etc. – injected playfulness and humanity into the collective improv effort and made this a memorable and fun show.