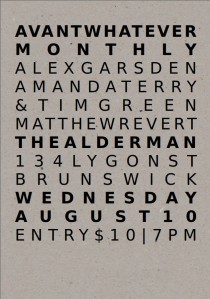 Alexander Garsden (b. 1987) is a composer, guitarist and electro-acoustic musician, working across multiple exploratory musical disciplines. He is based in Melbourne, Australia. Recent works include commissions from the Melbourne and Sydney Symphony Orchestras, Speak Percussion, Michael Kieran Harvey, Jessica Aszodi, Eugene Ughetti, and Golden Fur, alongside performances with Slave Pianos (Melbourne/Yogyakarta), Erkki Veltheim, and Rohan Drape. He performs as a soloist of both notated and improvised musics, and in a range of other contexts including True Strength (with Ida Duelund-Hansen), Francis Plagne, Ned Collette and Wirewalker, Yuko Kono, and Forth Impact (with Sam Dunscombe). Alexander is co-director of the INLAND Concert Series, and has taught through the RMIT and the University of Melbourne.

Amanda Terry & Tim Green are a violin and percussion duo from Brisbane.

Matthew Revert is an author based in Melbourne, Australia. His work tends toward the indescribably unusual and patently absurd and defies easy genre classification. His first book, ‘A Million Versions of Right’ was released in July 2009 by Australian-based press, LegumeMan Books. It has been very well received by those kind enough to read it, which to be honest, isn’t that many people. Outside of writing, Matthew also works as a graphic designer. He tries admirably to record music, however he’s not very good at it. His only area of vague aptitude is in writing.