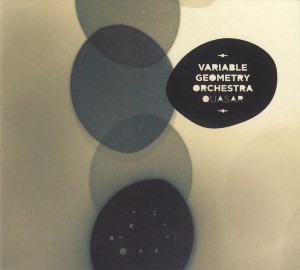 The Variable Geometry Orchestra is a large electroacoustic ensemble with a fluid, international membership spanning three generations. For this release, recorded in November 2015 at St. George’s Church in Lisbon, Portugal, the group was made up of forty-six members. The thirty-one minute performance was conducted by VGO leader Ernesto Rodrigues.

Maneuvering a heterogeneous ensemble of this size in a way that maintains cohesion, a sense of movement and textural variety without undue clutter is a significant challenge. Rodrigues succeeds on these counts—helped in no small part by the accomplished improvisers he conducts—and the result is an integrated performance that nevertheless is constantly in flux.

The theory behind the ensemble’s process seems to be to improvise an overall architecture by arranging complexes of sounds moving in relation to each other. In practice this means modulating the dynamics and density of the background to allow different instruments or instrumental combinations to shift to the foreground. One may, for example, hear reeds skittering over the top of quiet chords underscored by a rich foundation of low strings; pizzicato double basses and guitars outlining the upper and lower boundaries of the ensemble’s aggregate compass; or brass exclamations over a simmering and thickening bed of soft-edged timbres. The collective sound is always engaging, as this version of the VGO benefits from a very rich palette of sound colors and a wide range running from double bass—no less than five of them—to flute. 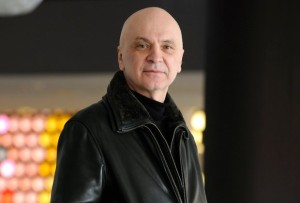 ZWISCHEN LEBEN UND TOD | MICHAEL HERSCH
The most recent in a series of several program-length works Michael Hersch has written over the past decade, Zwischen Leben und Tod is one of only three Hersch works to co-exist and engage exclusively with visual art. Arranged in twenty-two sections, each part pairs with a painting or drawing by Peter Weiss (1916-1982). Better known as playwright and novelist, Weiss was also a remarkable visual artist and filmmaker. National Sawdust presents the New York Premiere, and only the second performance anywhere, of Hersch’s 80-minute work in a full multi-media presentation.
Tuesday, June 28 at 7:00 PM
Tickets $25
National Sawdust, 80 North 6th Street, Brooklyn, NY

Bastet
Freedom is a State of Mind (Self Produced)