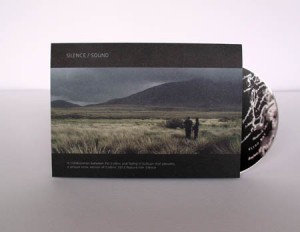 Sound / Silence is a road movie using The Book of Kells for a sat nav. In 2012, Pat Collins completed the film Silence, the story of Eoghan, a sound recordist who returns to visit his native Ireland after an absence of fifteen years, to record “the sound of silence” or rather, life as it abides absent of man-made sound. A fool´s errand, as despite the remote terrain he traverses, his journey is dotted with encounters, talkative men and women, “legends heaped upon legends, lore heaped upon lore” and the funny things you can sometimes hear on the wind.

Together with colleague Tadhg O´Sullivan, he returns to the film with this versioning, a remix commentary on sound as a trigger for memory, both individual and collective. Leaving Berlin with a kiss goodbye in the form of a quote from Hölderlin, Eoghan will discover a different kind of silence, one that goes gene deep. Beautifully arranged, Sound / Silence moves across marrow chilling heath and into pub hearth warmth. Voices conversing, reciting, notating, singing (we open with a winsome version of “The Breeze and I“) in German, English, Irish, birdsong high-pitched and dove throaty, are interspersed with a soundtrack proper, so to speak, including excerpts from works by Damian Valles, Akira Rabelais, and Seán Mac Erlaine, respectively.

A country created over thousands of years by the unceasing non-silence of the sea and the sum of the often ornery spirits of its inhabitants, both real and fictional, Sound / Silence is a lyrical evocation of the flowers and the nettles sticking up out of its velvet smooth, green landscape, of the song and the language as a song for the self and as a force of nature, as Eoghan learns. No matter how many songs you sing, there is no gainsaying the sound of silence, as a curlew carries the words off into the wind.

Each summer REDCAT celebrates the vitality of Los Angeles’ vibrant and growing community of artists making work for the stage. We transform our theater into an artist-driven creative laboratory where disciplines are challenged and blurred, traditions are re-imagined, and hybrid visions take hold.

Program 3: August 4, 5, 6
I AM A BOYS CHOIR: demonstrating the imaginary body or how i became an ice princess
Daniel Corral: Comma
Wilfried Souly and Aaron Mason: On Becoming