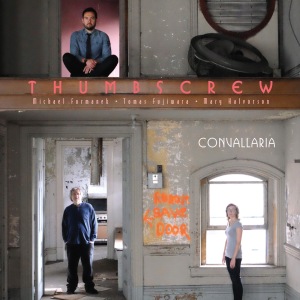 Convallaria majalis is the scientific name for the lily of the valley, an attractive, sweet-smelling, yet highly-poisonous flowering plant. On this, their second album, Thumbscrew provides a similar juxtaposition – music that pays homage to the familiar and comfortable jazz tradition, then proceeds to transcend it in an avant-garde exploration.

Consisting of Mary Halvorson on guitar, Michael Formanek on bass, and Tomas Fujiwara on drums, Thumbscrew adopts the instrumental format of a power trio. The center-point of the group is undoubtedly Halvorson, who has done more than anyone for jazz guitar in the last ten years. Her playing, which has been well-document here and on other pages, is a herky-jerky, prickly amalgam of Joe Morris, Derek Bailey, and Sonny Sharrock. The fact that she can play with such odd meters and timbres, yet make her lines fit into the rhythmic structure provided by her bandmates, reflects extraordinary feel and intelligence on her part.

But one should not downplay the contributions of Formanek and Fujiwara, both veterans of creative music in their own right. The former has been a major contributor to the works of Tim Berne, and has played with Dave Douglas, Scott Fields, and Steve Swell amongst many others. Despite being a generation older than Halvorson and Fujiwara, Formanek is a formidable outside presence on this recording, playing notes up and down the bass, never resting. Fujiwara has settled into being a supple and powerful drummer, updating the jazz percussion styles of the 50’s and 60’s with a modern feel informed (but not limited) by rock music. 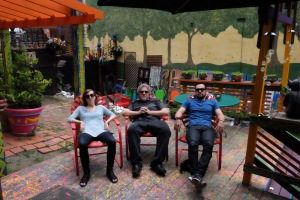 Convallaria is an eleven track set of short and mid-length tunes that provides all three members a chance to stretch out. On the opener, Cleome, Halvorson speed-picks with heavy distortion over a shifting base provided by Formanek and Fujiwara, before heading into deeper free-improv waters. Another notable performance is on Screaming Piha, an open ended composition with Halvorson using delays to multitrack fuzz guitar into a wall of sound, while her bandmates provide a slowly increasing tempo that ultimately blends into this wall.  Tail of the Sad Dog features fractured rhythms over which Halvorson provides clearly-picked melodies combined with sounds formed by sliding her fingers up and down the fretboard. Fujiwara, in particular seems to go in his own direction on this track, leading the others with his urgent snare-work. On Spring Ahead, Formanek gives his bass a bowed workout while Halvorson stretches and bends notes.

It is no surprise, given the pedigree of its performers, that Convallaria is a strong album. Thumbscrew has something of an “it” factor, in that they are sailing out of sight of land, and yet their offerings are warm and enjoyable.  A solid release of the year candidate.