Although originating in France and particularly identified with the work of composer Gérard Grisey, Spectralism also flourished in Romania. Horatiu Radulescu (1942-2008), a Romanian composer who for a period took up residence in Paris, crafted a Franco-Romanian Spectralism with unique characteristics of its own. The three works presented on this CD—two piano sonatas played by Stephen Clarke and one string quartet—trace the development of Radulescu’s variation on Spectralism in the period 1990-2003.

Radulescu studied in the Bucharest Academy of Music in the late 1960s, relocating to Paris after his graduation in 1969. In the early 1970s, he took summer courses at Darmstadt with Cage, Ligeti, Stockhausen and Xenakis. He continued to esteem Xenakis’s music throughout his life. Also in the early 1970s he was a student of Messiaen at the Paris Conservatoire. His artistic aim was to create a “sound plasma” of dynamic musical textures through which the listener could become immersed in the microtonal nuances deriving from the overtone series. He drew inspiration from the Tao Te Ching of Lao Tzu as well as from Pythagoras; many of his works—including the three on this release—are titled or subtitled with lines from Stephen Mitchell’s translation/paraphrase of the Tao Te Ching.

The two piano sonatas—No. 2 of 1991 and No. 5 of 2003—represent a kind of synthetic Spectralism—a Spectralism that is concerned with natural harmonics, but as interpreted through the instrument’s equal temperament. Also part of the synthesis is Romanian folk song, which provided Radulescu with melodic source material. The sonatas are distinct from Radulescu’s early experiments with retuned, bowed piano and show him now turning to the conventional piano. Piano Sonata No. 2, which is from a set of three piano sonatas (Nos. 2, 3 & 4) commissioned by pianist Ortwin Stürmer, incorporates themes taken from the Bb, C and B overtone series as well as a hexatonic mode with a B root. The textures are sparse and prismatic, and appear to develop their thematic material through repetition and fragmentation. Piano Sonata No. 5, like No. 2 a three-movement work, arranges Romanian folk motifs in multi-tempo canons in which the modal flavor of the melodies is particularly pronounced.

The CD’s centerpiece, both literally in terms of its placement and figuratively in its capacity to compel attention, is Radulescu’s String Quartet No. 5, titled “before the universe was born.” Realized here by the JACK Quartet, the piece is a tour de force of extended timbre amounting to a sort of dissonant counterpoint with instrumental color. The glassy sounds of sul ponticello bowing and high harmonics, and the frequent uses of multiphonics all make for an otherworldly sonic texture—quite literally, as at times the quartet sound as if they’re channeling the rising and falling squeals of extraterrestrial lightning-generated radio waves. It is a powerful performance of a thrilling work. 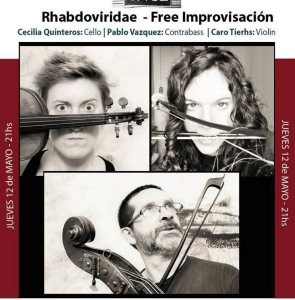 Synthesizer and electronic music pioneer Isao Tomita has died at 84, The Japan Times reports. Tomita was responsible for helping to bring analog synthesis and electronic music to Japan in 1971, when he imported a Moog III P at a time when such an instrument was a rarity in the country. Tomita is perhaps best known for his album Snowflakes Are Dancing, comprised entirely of Claude Debussy‘s “tone paintings.”

DENSITY IS A KIND OF LOVE | TRANSIENT CANVAS & CHRIS WATFORD
The Transient Canvas duo and Chris Watford (bassoon) join up for a program exploring radical new sonic identities of the bassoon, bass clarinet and marimba. With raw, primordial, and human tapestries, each work transforms the instruments in strange and startling ways.
Monday, May 9 at 8:00 PM
Tickets $8
ShapeShifter Lab, 18 Whitwell Pl, Brooklyn, NY

ARTO LINDSAY
Lindsay’s program, which will be announced from the stage, will include music that echoes themes of cultural experimentation and cross-pollination, drawing on elements from American and Brazilian rock, pop, experimental music, and improvisation.
Thursday, May 12 at 7:30 PM
Tickets $18, $15 students/seniors
The Jewish Museum, 1109 5th Avenue, New York, NY

REINTERPRETATIONS: POLYPHONY, MYSTICISM, AND THE MUSIC OF OPPOSITES
This month at Reinterpretations, composer Ramin Arjomand presents a world premiere performance of his Salve Regina, a rhythmically complex, unrelentingly polyphonic 25-minute work for string quintet that uses an 11th century Marian antiphon as its inspiration. A discussion will follow, providing context for the compositional process used in Salve Regina, with musical examples, examining the expressive and esoteric uses of counterpoint as a cornerstone of Western European musical thinking.
Sunday, May 15 at 3:00 PM
Tickets $15, $10 students/seniors
Spectrum, 121 Ludlow Street, 2nd Floor, New York, NY