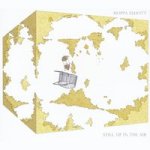 One thought on “AMN Reviews: Moppa Elliott – Still, up in the Air [Hot Cup Records]”