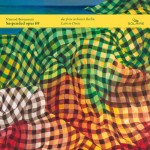 String orchestra score for the troupe Gandini Juggling’s ballet “4×4 Ephemeral Architectures”, this is the world premiere recording of Nimrod Borenstein´s Suspended Opus 69, by das freie orchester Berlin (founded by Solaire label chief Dirk Fischer) under the baton of Laércio Diniz. Borenstein (b. 1969), who began his musical training at the tender age of three, originates from Tel Aviv, grew up in Paris and eventually moved to London. He is currently an Associate of the Royal Academy of Music and has dozens of works to his name.

Clad in green-shifting-red tattersall (designed by brother Alec), the disc in its sturdy slip case is accompanied by an Alice Munrovian compilation of texts, all of which this reviewer chooses to enjoy with a glass of wine after having absorbed this new voice (to him at least) with fresh ears and a mind untainted by insight or preconceived notions gleaned from the booklet.

The nine movements (plus a mood-setting violin prelude, moving from on high down to the bass) of this forty-minute work comprise a picnic celebration of post-sacred music, excited strings a paean to enlightenment, to the light (and a little dark) entertainment – tango, waltz – of a world of harmony still within reach, as easy to pluck as the long-stemmed roses of the violas. Borenstein clutches eighteenth-century fulsomeness and various modernists and contemporaries (Grieg, Stravinsky, Pärt) in the same warm embrace. Shapely and sophisticated, kinetically optimistic (though briefly “Annoyed” – ants at the picnic?) and ambiently contemplative, Suspended Opus 69 is swirling, epicurean, delightful. In its well-structured accessibility, it would also serve perfectly as any young person´s introduction to the orchestra.