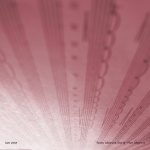 These two long compositions for electric guitar orchestra by UK composer/guitarist Ian Vine show how mass can be generated from multiplicity. Each work is composed of a given number of separate parts or objects, each of which is made up of a set of notes and is assigned to one guitar (all of which were played by the composer for this recording). Both tracks feature elongated, discordant sonorities that threaten not to resolve, with the second being the darker of the two. The overall profile is dense and drone-like, but even within this density individual parts make themselves heard as if moving between foreground and background as harmonic patterns emerge and disappear, floating in and out of the frame. The length of the pieces facilitates the kind of absorbed listening this kind of music benefits from: After a while the nuanced shifts of harmony and timbre take on an almost dramatic cast.