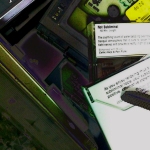 C. Reider’s Not Subliminal, a collection of five mostly real-time improvisations for multiple cassette decks, is an essay in post-acousmatic sound art carrying echoes of an age of mechanical reproduction past.

Reider’s sound sources are cast-off audio tapes he found in thrift stores as well as a video tape cut down to play on an audio cassette deck. One or more tapes were run and manipulated while a separate deck recorded the resulting sounds, in addition to any ambient sounds present. Underneath the hissing of tape and the humming of the decks’ playback machinery some of the sounds of this audio salon des refusés jump out and identify themselves: Various talking heads, bits of now-unpopular pop music, scrambled fragments of a theatrically delivered monologue on Scientology.

As with much of Reider’s work process is brought to the foreground, in this case as embodied in the sounds of the machines constructing the work—the squeal of spindles turning, the general rattle and buzz of moving parts. The artist’s hand is also audible, snapping cartridges onto sponsons, pressing buttons, picking up the next tape to go into the deck. In the end what isn’t subliminal here are the immediate, explicitly indicated sonic traces of the conditions and means of these improvisations’ production.

One thought on “AMN Reviews: C. Reider – Not Subliminal [controlvalve 055]”