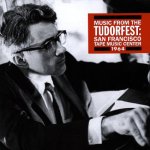 Over the course of six evenings in spring, 1964, the San Francisco studio of radio station KPFA was the site of an exciting presentation of experimental music and proto-performance art cosponsored by KPFA and the San Francisco Tape Music Center. Initiated by composer/musician Pauline Oliveros and curated by pianist David Tudor, the aptly titled Tudorfest featured new and recent work by John Cage, Oliveros, Toshi Ichiyanagi, Alvin Lucier and George Brecht. A selection of performances from those evenings has been brought together in this historically important three-CD set.

The Tape Music Center was the natural choice for undertaking an event like the Tudorfest. Established in 1961 as a studio and performance venue for Bay Area experimental composers and musicians, the center played a key role in fostering new music and intermedia and acted as a kind of bridge between the West Coast performing arts avant-garde and the nascent counterculture. The two groups shared a communal mentality manifesting itself in the spirit of spontaneous invention and an openness to the moment; the arrow of influence here may well have run in either direction. Thus the Tudorfest combined improvisation—embodied in Oliveros’ work for her accordion and Tudor’s newly adopted bandoneon, with vocal contributions from a sporadically gregarious mynah bird—with open form compositions by Cage and Ichiyanagi as well as conceptually-oriented work by Brecht and Lucier. (Because these latter were quasi-theatrical performance pieces relying on a visual element, they were not represented on the release.)

The Cage pieces included here were composed during a time when Cage was turning from chance-generated compositions to compositions employing indeterminacy as a structuring principle. Sometimes this entailed creating scores on transparencies that could be superimposed in varying combinations (Music Walk, Atlas Eclipticalis and Variations II); sometimes it meant scoring works as a series of pages to be chosen at the performer’s discretion (Concert for Piano and Orchestra); sometimes it involved allowing the performer to choose ways to prepare an instrument (34’46.776” for Two Pianos).

Perhaps the most notorious of these indeterminate works—notorious because of its legendary mishandling by Leonard Bernstein and the New York Philharmonic just weeks before its realization at the Tudorfest—was Atlas Eclipticalis, performed at the Tudorfest in tandem with an electronic version of Winter Music by a sixteen piece ensemble notable for including Tudor on piano, Stuart Dempster on trombone, Oliveros on tuba, Loren Rush on double bass, Morton Subotnick on clarinet, and future Mother of Invention Ian Underwood on flute and piccolo. The need for the performers to realize the work as a kind of collaboration with the composer is encoded in the orchestration; Atlas Eclipticalis (1961-1962), like the Concert for Piano and Orchestra (1957-1958), calls for each member of the ensemble to function as a soloist with a separate part. The resulting sound is a kaleidoscopic constellation of notes and noises entering and exiting individually, sometimes sounding alone and sometimes overlapping. The less conventionally scored chance work Music Walk (1957) for piano, radios and other sound makers, and Variations II (1961), for any kind of sound maker, share with Atlas an audio profile made up of discontinuous sound events spread out or clustered into an unpredictable overall texture.

Cage’s 1954 time-length composition 34’46.776” for prepared piano opens the set and is in many respects the most compelling work included. The chance-composed work was originally written for Tudor and premiered at Donaueschingen; it was accompanied by 31’57.9864,” another, simpler duration work for prepared piano that Cage wrote for himself to play while Tudor played 34’46.776.” The works’ pitches were specified but the matter of which preparations to use and how to place them during the course of the performance were left up to the performers. As interpreted by Tudor and Dwight Peltzer (the latter playing 31’57.9864”), the work is a tour de force of linear klangfarbenmelodie. Given the ways the pianos were prepared, some pitches are left with their natural colors, some are muted or made to buzz or rattle, some are simply rendered into pitchless sounds. The interaction between Tudor and Peltzer allows lines to develop with a marked clarity as phrasal continuity is maintained throughout constant changes of pitched and unpitched timbres passing back and forth between the two pianists.

The two Ichiyanagi compositions included in the set are two versions of Music for Piano No. 4 (1960), one electric and one acoustic. Ichiyanagi’s score consists of enigmatic verbal instructions which the performer must then translate into concrete actions. Tudor’s interpretation entailed taking objects and rubbing them against the outside of the piano. (The electronic version calls for putting contact microphones on the objects.) What Tudor elicits from the instrument is in some real sense the sound of a piano, albeit one whose strings are left untouched.

In the fifty years since the Tudorfest the idea that musical performances can encompass sounds and gestures outside of traditional conventions is, if not universally accepted, at the very least admissible. This wasn’t the case in 1964, and it’s therefore significant that the critical response to the Tudorfest—to judge from Alfred Frankenstein’s review in the San Francisco Chronicle—was, in contrast to the hostile response Cage’s work found in New York the February before, sympathetic. In fact, the Bay Area seems to have been unusually open to experimentation with and between art forms as well as to contacts between the art music avant-garde and musicians working in other genres. So much so that by the time of the Trips Festival in January 1966 the local center of cultural gravity was shifting from the avant-garde to the psychedelic bands, many of whose members had attended Tape Music Center events and had been inspired by what they saw and heard. This set is a valuable artifact documenting one moment from that time of great ferment.