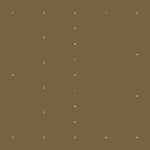 Among other things, Steve Roden is a sound artist who works in film and sound installations. Roden is known for the “lowercase style” of music, which amplifies usually unheard sounds into larger soundscapes. Stephen Vitiello also works in film and installations, and creates soundscapes from incidental environmental noises as well. Based on these descriptions, one probably has an idea of how The Spaces Contained in Each sounds.

In this single 49-minute track, Roden and Vitello combine seamlessly to set out shimmering, scratchy background drones, on top of which lie their incidental sound effects and creations. Bells, popping noises, and gentle, post-industrial clangs combine with other foreground tones.  All of this in blended to such a point that there is nothing jarring nor shrill. The Spaces Contained in Each is music that can be listened to over and over, with new textures and characteristics emerging each time.

Quite a bit of this type of experimental music comes across our desks, most of it at least modestly interesting. But Roden and Vitiello have taken it up a few notches on this subtle, complex release.