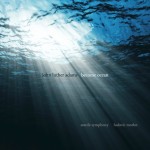 For a moment, put aside the fact that this piece won the 2014 Pulitzer Prize for music. Commissioned by the Seattle Symphony Orchestra, Become Ocean invokes a majestic and disturbing vision of our world after a global warming event. But you put aside that notion as well, if you must. Become Ocean is a fine piece of modern classical music that straddles the line between the conventional and experimental.

Adams’ strategy for this composition was to divide the orchestra into string, woodwind, and brass sections, and give each a swelling and ebbing wall of sound. Accentuating these atmospherics are piano, harps and percussion, which play mostly, or off and on, throughout. Tidal frequencies and patterns are clearly suggested, as are coastal winds and the crashing of waves. But the dark, lushness of Become Ocean dominates this 42-minute piece. Without using electronics, Adams has created a post-minimalist cascade of drones that sweeps and lumbers like a subtle electroacoustic recording.