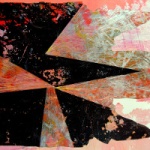 Rob Mazurek and Chad Taylor are at it again as Chicago Underground Duo, with an offering that falls somewhere between free jazz, electronica and IDM. Yes, Locus is that broad. Both members of Chicago’s rich creative jazz scene, the pair have teamed up, for the seventh time, to produce a fresh release of genre-twisting intricacy.

Mazurek is no stranger to these pages, as he has been an integral part of a number of brilliant groups, including Sao Paulo Underground (AMN Review), the Rob Mazurek Octet, and Exploding Star Orchestra. Taylor was a frequent collaborator with the late Fred Anderson, and has also played with Jeff Parker, Assif Tashar, Marc Ribot, and many others on over 50 recordings.

Here, Mazurek is credited with cornet, synth, Game Boy, electronics, bamboo flute, and voice, while Taylor plays drums, mbira, guitar and balaphone. In a way, Locus is a logical progression from the latest Sao Paulo Underground release, as Mazurek combines his hard bop roots with electroacoustic improvisation. Taylor brings an Art Ensemble of Chicago influence to the tracks, harkening to that group’s use of non-western polyrhythms.

To the casual listener, they might not even realize that they are experiencing avant-garde music – the overall feel is slick, aggressive, and modern, but also abstract and cerebral. With one foot in jazz, another in layered synthscapes, Locus is a worthy and compelling addition with the Duo’s ongoing legacy.